Richard A. Zacur is a partner at the law firm of Zacur, Graham, P.A., whose office is located at 5200 Central Avenue, St. Petersburg, Florida.

Mr. Zacur is a member of The Association of Trial Lawyers of America, The Academy of Florida Trial Lawyers, The American Bar, The Florida Bar, The St. Petersburg Bar, The District of Columbia Bar, The American Judicature Society. He served on the Grievance Committee for the Sixth Judicial Circuit (60), as Chairman and Vice-Chairman.

He received his Bachelor of Arts from Florida State University in 1971 and his Juris Doctor from Stetson University College of Law in 1974.

Mr. Zacur was elected to Who’s Who in American Universities and Colleges; elected to Who’s Who in American Law; Bar Register of Preeminent Lawyers; Member of American Society of Legal Advocates; was recognized by The Florida Bar for Meritorious Public Service and is an AV Rated lawyer, the highest rating from Martindale-Hubbell Peer Review Board. Mr. Zacur is also one of the top 100 Trial Lawyers, 2019 Florida Best Lawyer, National Advocates Top 100 & Super Lawyer for 2019.

Mr. Zacur presently represents a substantial number of condominium associations and
homeowner associations. He is a member of the Community Associations Institute
(Suncoast Chapter) and has participated in a number of seminars and lectures over the
last several years and is a certified instructor for property managers and directors of condominiums by the Division of Florida Condominiums, Timeshares and Mobile Homes. 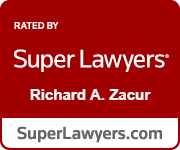